Brazil is the worlds leading exporter of soybeans. Our team works directly with producers of soybean and its by-products, allowing you to streamline your purchasing. 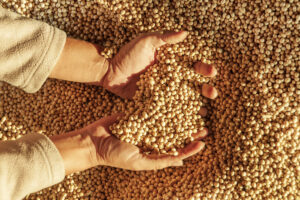 We work exclusively with soybeans from Brazil. The beans are planted in Brazil on an area of ​​approximately 36 million hectares, making Brazil responsible for more than 33% of the global soybean production, and the second-largest soybean producer in the world.
Brazilian soybeans usually contain a higher protein content than soy produced in other parts of the world.
In addition to the common GMO soybeans, Brazil also produces a considerable amount of non-genetically modified soybeans (non-GMO).

Click on the datasheets below for additional details on the commodity.